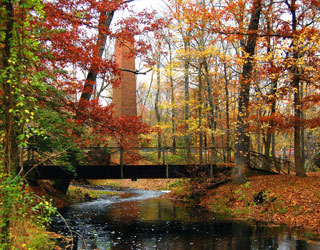 The Weymouth Forge / Furnace, part of the Atlantic County Park System, is located on Route 559, just north of the Black Horse Pike (Route 322). The Weymouth Forge land was purchased in 1800 from the West New Jersey Society by five partners headed by George Ashbridge and Charles Shoemaker. In 1801, the State granted permission to dam the Great Egg Harbor River "for accommodation of iron works and other waterworks...". Iron production began in 1802.

Looking at the area now, it is hard to imagine that by the time of peak production in the early 1850s, the tract contained a furnace, forge, gristmill, Methodist church, sawmill, large owner's mansion, store, 20 workers' houses, a blacksmith shop, and a wheelwright.

The forge remained in production for about 60 years. The iron produced at Weymouth was smelted from local bog iron in furnaces fueled by charcoal. Production consisted mostly of cast iron water pipe with limited production of pots, stoves, and nails.

During the War of 1812, the Weymouth Forge / Furnace was a supplier of shot and bombs to the United States Government. By 1862, the Forge could no longer compete with anthracite coal powered forges of the Pennsylvania area. It was reportedly destroyed by fire that same year. 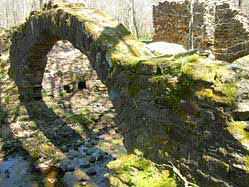 In the 1860s, the land was the site of 2 paper mills: Atlantic Paper Mills, made of stone, and Weymouth Paper Mills, a wooden structure. These two plants produced paper primarily from old manila rope, rags, and old bagging until 1886, when wood pulp was used for paper production. The mills ceased production in 1897.

The land was sold to pay debts. The new owner did nothing to develop the site. Shortly thereafter, the buildings started to collapse. The dam broke, which drained the mill pond in 1916. The paper mills were vandalized for their stone, but the foundations remain. It has been about 100 years since the shutdown and much of the information about what had been a prominent community of the Pinelands region is long lost. Visitors to this site can see the remains of the mill. Look, take pictures, but please do not remove any part of the buildings.

Starting in 1966, the Atlantic County Government has acquired part of the original 85,973 acre tract. This park is visited frequently, because of the ruins that still remain, and because it is a popular starting point for canoeing on the Great Egg Harbor River.