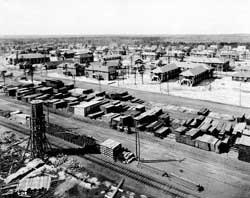 In April of 1917, the United States declared war on Germany. Normal peacetime items such as food and clothing were already being produced in this country, only an increased incentive was necessary to meet war time demands. But new factories for modern munitions productions were greatly needed, and four new plants came into existence: Atlantic Loading Co. (AMOTOL), Bethlehem Loading Company, DuPont Engineering Company, and T.A. Gillespie Loading Company.

The organization and implementation of the Bethlehem plant's construction was an example of the engineering skills, patriotic spirit and the abilities of the American workforce. The area selected was a tract of land stretching from below Mays Landing to Petersburg, consisting mostly of swampy land, totaling approximately 10,000 acres.

The railroads had to be built soon after groundbreaking in March of 1918 to bring in necessary construction materials. This was followed by a town called Belcoville (short for Bethlehem Loading Co. ) to house thousands of employees. By August, a complete town to house 400 families and 3,000 single people was completed, along with a town hall, school, bank, bowling alley, and all types of stores. 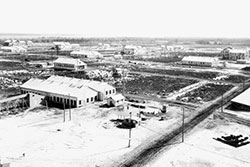 The modern plant had 24 miles of track along with administration buildings, cafeterias, change houses, police buildings, and military barracks to house 1,100 soldiers to guard the plant.

The armistice ending World War I was signed on November 11, 1918, and the loading facility continued production into 1919. The end of production was signified by the removal of all usable steel and iron, such as the railroad tracks and buildings, for use during World War II. The concrete foundations and the rail beds are all that remain as a silent reminder of American patriotic response to a world crisis.

The Atlantic County Park in Estell Manor contains most of the plant and administration buildings, ruins of which still remain. Enjoy the park and its ruins, but please do not remove any artifacts.