Questions/Comments?
Email the Public Information Officer - pio@atlantic-county.org
or use our contact form.

Atlantic County was carved from Gloucester County in February 1837 with boundaries that have remained substantially the same to this date.

1938 Board of Chosen Freeholders

The County is bounded on the north by the Mullica River; on the South by the Great Egg Harbor Bay and the Tuckahoe River; on the West by Camden and Gloucester Counties and on the East by the Atlantic Ocean.

The County Seat was established in Mays Landing in 1837, and a courthouse was built there in 1838.

The first Board of Freeholders was established in Mays Landing in 1837, with representatives from four townships— Galloway, Egg Harbor, Hamilton and Weymouth. As more townships and municipalities came into being, the Board grew to its largest membership — 35 in 1966. In 1967, the State Legislature reduced the large board to a seven person at-large County Board. It remained at that size until 1975, when the new County Charter went into effect. 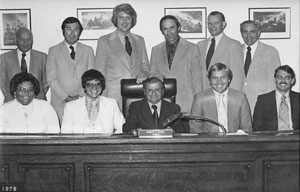 1976 Board of Chosen Freeholders

In 1974, Atlantic County voters passed a public referendum to change the County governmental form under the Optional County Charter Law to the Executive form. The Charter provides for a popularly elected Executive, responsible for the administration of County government, and for a nine-member Freeholder Board, responsible for legislation. The Executive is elected for a term of four years; the Freeholders are elected to staggered three-year terms. Five of the Freeholders represent equally populated districts; four are elected from the County-at-Large.

The original Atlantic County Administrative Code was adopted in May 1976 and established eight county departments. The Administrative Code was last modified in June 1997 and established seven county departments: Administrative Services, Community Development and Economic Assistance, Human Services, Law, Public Safety Works and Regional Planning Economic Development. In addition, each of the Constitutional Officers have departmental responsibility. The Constitutional Officers are: the Prosecutor, the Sheriff, the Clerk and the Surrogate.

Citizen involvement and input is provided through Advisory Boards. Members are appointed to these Boards by the County Executive, with the advice and consent of the Board of Freeholders.

The most prevalent form of local government currently in existence in Atlantic County is Mayor–Council. The Township Committee form, which calls for the Mayor to be appointed from among popularly elected members of the Committee, is found in six municipalities. Commission forms are found in three communities, and the Township Manager form in one. The roots of local government in Atlantic County are long-standing. While community sizes and government forms vary, the commitment to citizenservice, which is well-developed, is a matter of pride.

All 23 governing bodies are legally classified as municipalities, although they are properly titled Boroughs, Towns, Townships and Cities.