Questions/Comments?
Email the Public Information Officer - pio@atlantic-county.org
or use our contact form.

This is a copy of a page from the Library of Congress (LOC) website. It was featured on the LOC website on June 26, 2001, in honor of the birthday of the famed Atlantic City Boardwalk. 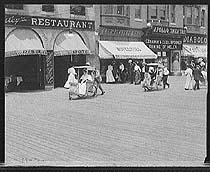 On June 26, 1870, the first section of the Atlantic City Boardwalk opened along the New Jersey beach. Dr. Jonathan Pitney and civil engineer Richard Osborne began developing the area on Absecon Island in 1850. Long before this time though, the Lenni-Lenape tribe were the first seasonal visitors to enjoy the summer splendor of the island.

Alexander Boardman, a railroad conductor, conceived the idea of constructing a boardwalk as a means of keeping sand out of the railroad cars and hotels. The city used its tax revenues to build an eight-foot-wide temporary wooden walkway from the beach into town which could be dismantled during the winter. 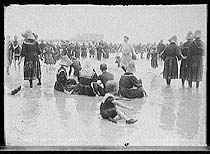 The rolling chair, introduced in 1884, was the only vehicle allowed on the Boardwalk, which was soon extended by enormous amusement piers such as Steel Pier, visible in the background of the photograph above.1

Any consideration of the boardwalk demands at least a nod to salt water taffy, a favorite beach-side treat. Taffy is a candy made of corn syrup and white sugar: the boiled confection is pulled and folded, then rolled into a long strip from which shorter (about two inch long) strips are cut, wrapped in stick resistant paper, and sold. Along the Atlantic City Boardwalk folks have purchased the product since at least the early 1880s. In presenting its opinion on a case concerning the right to label one's product the "original" salt water taffy, the Supreme Court long ago held that no one company might claim that right as salt water taffy, ". . . is born of the ocean and summer resorts and other ingredients that are the common property of all men everywhere."

Early bathers wore bathing dresses of wool flannel with stockings, canvas shoes, and large straw hats. The more daring bloomer suits and stockings worn by these bathing beauties were not introduced until 1907. Censors roamed the beaches monitoring bathers' self-exposure and looking for offenders who showed more flesh than the local code allowed.

Search on Atlantic City in these collections to find more images of this summer attraction. 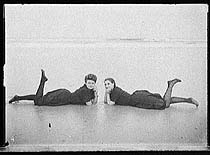 All links on this page go to the Library of Congress server.