The Atlantic County Justice Facility will begin accepting visitors on Monday, June 7, by appointment.  The Atlantic County Justice Facility (ACJF) will continue taking all necessary precautions and following all federal and state health guidelines regarding COVID-19 to protect those in our custody, employees and visitors.  Click here to schedule an appointment.

The ACJF will continue to accept inmate funds through the mail.  Relatives and friends may send money orders, certified checks and cash ONLY. Personal checks will not be accepted. The ACJF accepts no responsibility for cash that is sent through the mail and lost. Each inmate will receive a receipt for funds received by this facility on your behalf. Please include the inmate’s full name and inmate I.D. number. 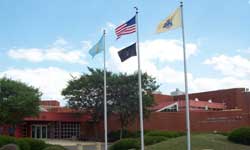 The Atlantic County Gerard L. Gormley Justice Facility is an adult detention facility housing male and female inmates who are pretrial, county sentenced and in certain instances, state sentenced awaiting shipment or state inmates contracted to the facility. It has two main sections, the Main Jail Building and the Main Jail Annex.

The Justice Facility opened in 1985 and was built to house 398 inmates. Since that time, the facility has experienced substantial growth and at one time housed an average of 1,000 inmates. The facility currently houses an average of 650 inmates.

The Justice Facility is operated by the Atlantic County Department of Public Safety. It opened its own Correction Officers Academy, certified by the New Jersey Police Training Commission, in 1997 and graduated its first class in 1998. The training academy trains all Atlantic County Correction Officers and accepts trainees from other New Jersey counties.

The Justice Facility is a nationally recognized leader in county correctional facilities. In 2020 it was selected from 500 accredited prisons, jails and juvenile facilities across the country to receive the Facility of the Year Award from the National Commission on Correctional Health Care.

The New Jersey Administrative Office of the Courts has incorporated the Justice Facility’s inmate classification program into the statewide computer system for use by all associated counties in New Jersey.